In recent decades, digital technology has been increasingly present in our lives since childhood.

We use mobile phones, computers and other electronic devices daily, for many hours, especially since 2020, when the covid-19 pandemic began.

Work and studies require spending many more hours in front of screens. In addition, we use social networks and applications, which only 25 years ago would seem like science fiction.

However, most of us lack basic knowledge about the damaging effects of poor posture on health, in the short and long term. 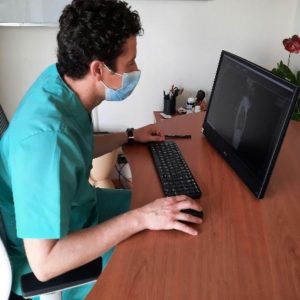 Two studies, published in 2016 and 2018 conducted with young people, aged between 25 and 35, showed that there is a direct correlation between posture and the function of the respiratory and pulmonary muscles. (1,2)

When the head is forward and the neck is flexed, the cranio-vertebral angle decreases and the tone of the cervical muscles increases.

In addition to causing mechanical stress, muscle tension and pain, it significantly decreases vital capacity ( oxygenation capacity) as well as the activity of the breathing muscles.

Another recent observational study, published in January 2022, was carried out with primary school children in Saudi Arabia. (3)

A significant decrease in the craniocervical angle was observed in both groups during and also half an hour after the use of the smartphone.

It is obvious that the more hours they use the phone screen, with their heads forward, the more the children’s spine deformes. Not only does their vertebrae lose proper alignment, but their spine remains deformed even after cessation of screen viewing.

The researchers warn that these children will grow up prone to musculoskeletal pathologies.

Below: 21-year-old student with forward head posture and rectification of cervical lordosis 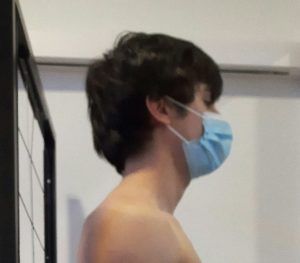 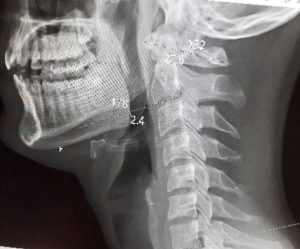 Rectification of the cervical curve is a spinal biomechanical alteration which refers to  loss of the correct vertebral alignment and intervertebral movement. This accelerates spinal degeneration producing disc disease and osteoarthritis.

In chiropractic terms we speak of ‘vertebral subluxations’ which reduce the foramen or foramina (spaces through which the spinal nerves pass). 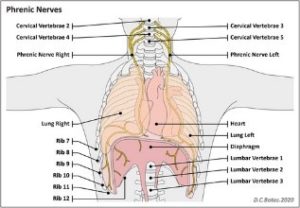 Usually, the most affected are the cervical vertebrae C3- C4- C5- the phrenic nerves pass, directed to the diaphragm,  our main breathing muscle. (1)

In addition to accelerating disc disease and osteoarthritis and reducing long-term breathing capacity, poor posture can lead to heart conditions.

An important study, published by the Archives of Internal Medicine in 2006, followed more than 4,000 men for 20 years. The researchers assessed and monitored each subject’s posture and assessed health risks related to poor posture. (4)

The men who experienced the greatest posture deviations and height loss over the 20-year period experienced a 64% increased risk of developing coronary heart disease. 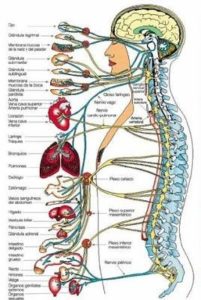 Right: The heart is affected by poor posture due to the relationship between posture, the spine, and the nervous system.

Poor postural habits negatively influence the health of the entire body and can cause damage that goes far beyond aesthetic defects and neck, headache or back pain.

The sooner we get a postural review and ‘tune-up’ or spinal adjustments, the better.

Unfortunately, we still think that: ‘if the spine doesn’t hurt, it’s fine’. The truth is that pain does not serve as a good indicator of whether a child or an adult needs a chiropractic checkup and treatment.

Waiting for the pain to arise usually hinders what would otherwise be a much faster recovery process.

Each chiropractic adjustment positively influences the posture and health of adults and children. By recovering  proper vertebral alignment and  movement it improves the brain’s communication with all organs, tissues and cells.

New Reflections on the Pandemic and Some Suggestions

It has been more than a year since the SARS COV-2 pandemic broke out, and, sadly, it continues.

The World Health Organization (WHO) warned that vaccines, even highly effective, do not guarantee the eradication of this infectious disease, However, WHO experts believe it is likely to   become an endemic disease with a relatively low level of threat. https://news.un.org/en/story/2020/12/1080982

What have we learned and how can we prepare?

If we look back we will realize that the problem is not only the virus itself, but the weakness of the immune system against it. All viruses, bacteria, or other microorganisms are strong when the host is weak.

Most of the people who occupied the ERs, practically collapsing the health system, during the first and second waves, were people with a weak immune system: elderly, and immuno-suppressed people with previous pathologies, what we now know as the population at risk.

The question is why are there so many weak people?

We tend to think that older people are weak because of their age, but this is not entirely true. Take the example of some of our older patients, who continue to care for themselves and are in good health. Most tend to avoid taking drugs or undergoing surgery, unless it is not absolutely necessary.

These are complementary therapies that, in addition to treating pain or other symptoms, enhance the function of all organs and systems of the body, including the nervous and immune systems.

If we stop and think, we will realize that this pandemic, which has generated a global health crisis, brings an opportunity for change. It shows us (once again) that we need to update and replace the current health paradigm, focused on disease, with a new model that focuses on health.

We need a medical practice that integrates all the therapies and protocols based on scientific evidence that respect homeostasis and therefore strengthen the body. Learning how to preserve health would be more beneficial and sustainable than treating disease.

If we were all educated from childhood on how our body works, how to breathe properly, how to maintain a good physical tone, how to hydrate and nourish ourselves, how to sit correctly and how to take care of our spine to obtain abundant vital energy, possibly humanity would be much healthier and stronger.

It is obvious that at the global level we cannot change anything. However we can do it at the individual level. Each of us has the possibility to get informed, using reliable sources, to learn how to maintain a healthier lifestyle and to choose therapies that strenghthen our health.

Fortunately, we are all endowed with a very powerful ‘weapon’ called Homeostasis.

It is a magnificent physiological resource that humans have developed and perfected over millions of years to keep viruses, bacteria or other micro-organisms at bay and to be able to live with them, without getting sick. Thanks to this, we are still here despite the numerous plagues and pandemics that affected millions of people in the past.

Maintaining homeostasis is the secret of the ‘lucky’ people, who do not get sick easily and, in the event of a disease, recover quickly, with little need for drugs. All these “lucky ones” consider physical and mental health to be  their first priority Therefore, they do not hesitate to invest time, resources and “whatever it takes ” to stay healthy. They are always willing to learn how to strengthen themselves and, despite the passing of the years, they remain healthy, full of vitality and optimism.

They are people who have learned to spend time with their body and listen to its whispers, before pain or othersymptoms appear.

What is homeostasis and how does it work?

It is the innate ability of the living body to maintain internal balance, compensating for changes in the environment through sophisticated selfregulation systems.

This internal balance is controlled by the Central Nervous System (CNS), made up of the brain and the spinal cord.

The brain receives information from all organs, tissues and cells: skin, muscles, joints, viscera, mucous membranes, etc., and sends its orders in the form of nervous impulses, through the spinal nerves, which pass between the vertebrae.

Keeping the spine flexible, well aligned and free of  subluxations” (in chiropractic terms)  enhances the communication of the brain with all the organs, helps  restore homeostasis and strengthens the immune response.

What is the relationship between the nervous system and the immune system?

The autonomic nervous system and the immune system are very closely related. Both systems cooperate with the common goal of adapting and maintaining homeostasis.

Communication between these two systems occurs through some proteins that act as chemical signals between white blood cells.

According to several scientific studies, IL-2 strengthens the immune response against viruses, bacteria and malignant cells.

Some examples of our patients who had and extraordinary immune response during the first and second waves of the pandemic.

Last year, just after the lockdown, one of our patients, a 39-year-old man, who works in ‘essential services’, told us that his wife was on sick leave and confined for being a person at risk.

She went out only to do the shopping. Unfortunately, despite wearing a mask and gloves, she got infected.and  developed the typical symptoms of COVID -19.

She was hospitalized and fortunately, recovered without sequelae.

They did the PCR and serological tests on him and both came out negative.  This fact greatly surprised his GP, who exclaimed: – “I don’t understand! It can not be!”  He finally attributed it to the vitamins we had recommended.

Soon after, another patient told us that her husband, who is not a chiropractic patient, also tested positive, but she tested negative.

A more recent case was that of a 63-64-year-old couple. He had come to our office complaining of continuos back pain, His back pain improved a lot. Moreover, following our advice, he began to do a daily routine of breathing exerciises and a few basic exercises for the spine. He also improved his hydration and nutrition habits. As a result, he gained flexibility, slept better, had more energy, and was in a better mood.

For this reason, his wife, despite not having back pain, decided to undergo a spinal examination and began receiving chiropractic care.

After the Christmas holidays they came in for another checkup and maintenance treatment. They were both good and very happy. They had celebrated the traditional ‘feast of the Magi’ (Fiesta de los Reyes magos) with their two daughters and their respective partners.

A few days later their eldest daughter, who works as an-MD tested positive for Covid-19. Their other daughter and their respective partners also tested positive.

Surprisingly, despite having a higher risk of contagion due to being over 60 years of age, both tested negative.

Some suggestions to get a strong Immune System:

One study, published in the Spanish Journal of Anesthesiology and Resuscitation, showed that ozone and high dosis of vitamin C infusions helped save the lives of many critical patients infected by Covid -19.